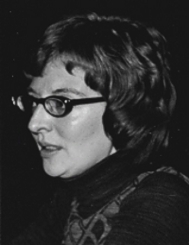 Born in Glasgow Scotland on December 19, 1932 Margaret earned her education in her homeland before travelling to Canada for new and exciting opportunities.

Her hard work, determination and empowering vision led to her serving as the National Executive Director of the Toronto Writers Branch of the Alliance of Canada Cinema, Television and Radio Artists (ACTRA) in 1977. Margaret then became the head of the ACTRA Writers Guild after its inception in 1982 – later becoming the Writers Guild of Canada in 1991.

During her tenure Collier helped bring forth the implementation of the production fee in the Independent Production Agreement (IPA), which meant screenwriters could make a living wage as a writer.

Collier’s legacy was synonymous with the celebration of Canadian screenwriting. The Academy of Canadian Cinema and Television established the Margaret Collier Award in 1986, which honours a Canadian television writer's outstanding body of work.

Margaret will be dearly remembered by her extended family in Scotland and many friends and former colleagues in Canada. She always honored her Scottish heritage but was very proud to be a Canadian.

She dedicated her life to her craft and the results of her tireless efforts and achievements can still be seen today.

Margaret received exceptional care at Lakeshore Lodge over the past 9 years. The staff there are to be commended for their skills, compassion and support.

In keeping with her wishes, cremation has taken place. Arrangements with Ridley funeral home, Etobicoke.