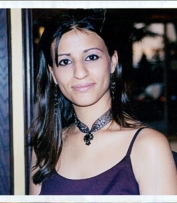 Da SILVA, Denise - Denise Da Silva passed away surrounded by those who loved her on July 26th, 2021 at the age of 39.

Born on February 16 in 1982, one of four children, she was raised and lived in Toronto where she attended Loretto College High School before starting her family.

As a child, when she was asked that common question that is often asked of children, ‘What do you want to be when you grow up?’ she always gave the same answer, “A mommy.” Being a mother was her most heartfelt wish and after meeting the man who would eventually become her husband, David, that dream became a reality with the birth of their first child, a little girl she and David named Vanessa. A little boy, Dylan, came along a few years later and Denise’s heart was full.

Denise was never happier than when she was taking care of her children, nurturing them, loving them and helping them grow and she was more than happy to continue that legacy when Valentina, her first grandchild came along.

Her daughter, Vanessa, now passes on those lessons of love to her own daughter, Valentina, and Dylan will have them to drawn upon as well when he someday begins his own family.

Denise was a beloved daughter, sister, wife, mother, grandmother and she will be dearly missed by all of us who loved her.