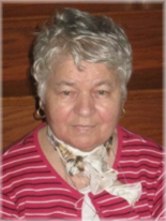 STOJANOVSKI, Dragica - It’s with heavy hearts that we announce the passing of our dear mother Dragica Stojanovski. She passed away quietly on the morning of September 15, 2021.

She was married to Najdo Stojanovski for 57 years before he passed on September 23rd, 2019.

She is survived by her four children Blagoja (Helen) and Tony both from Toronto, Rose (Aaron) and Mendo who both live in Dartmouth, Nova Scotia and her six grandchildren Perry, Graeme, Sylvie, Nicholas, Emily and Michael.

She was a lovely woman who cherished her role as a mother and grandmother.  She loved her Macedonian culture and music and often had music on while she spent the afternoon knitting.

She will never be forgotten and will live on with our memories and stories. She was the backbone of our family and was greatly loved by all.

Family and friends will be received at the Dixon-Garland Funeral Home, Markham on Monday September 20th. Funeral Service will be on Tuesday September 21, 2021 at 11:30am at St. Dimitrija Solunski Macedonian Church. Reception to follow at St. Nedela Macedonian Orthodox Church, 485 Bayly St W, Ajax ON, L1S 6M7.